Bill Booth was a glider pilot stationed at Barkston Heath, probably as part of the 61st Troop Carrier Group. He took part in Operation 'Market Garden' in September 1944. He stayed in what became the US Air Force after the war, retiring as a Lieutenant Colonel. He married Georgette Y Hartenstine, who had also served in the US Army Air Corps during the Second World War, and they had a son, William E Booth III. Their son would go on to join the US Air Force too. He married Doris Ann Klehm in 1972 and they had a son, Eric William Booth, in 1980.
For more information, visit The American Air Museum 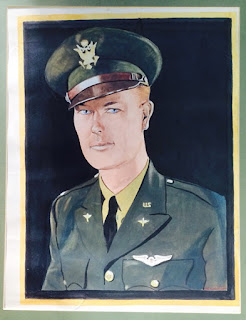 We have just returned from Arnhem, visiting the former British Headquarters there, now a museum, the field where the paratroopers landed, the Airborne Cemetery, and the John Frost Bridge.  The full realization of what took place during Operation Market Garden is truly felt when visiting any one of these sites. We honor and remember those who perished, and those who survived. 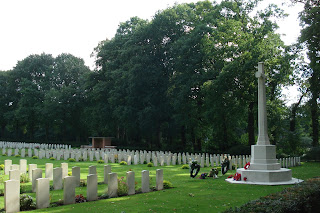 Remembering another Unfamous One...

F/O George L. Amberg, 95th BG, 336th Bomb Squadron, 42-3462 "San Antonio Rose" bombardier, pictured here in class book (43-8) USAAF Flying School Big Spring, Texas 1943. He served in the same Bomb Group and Squadron as my father in Horham, England, however my father did not arrive at the base until March 1945. 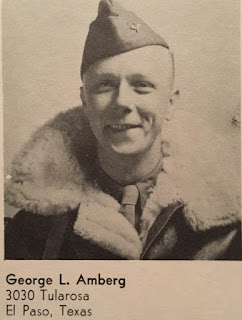 Private First Class Frank Pomroy...click on his name to read his story
from the National WWII Museum

A quiet man, Bernie Bell was a boarder at my mom's house in the 1940's. While my grandmother was cleaning one day, she discovered his war medals hidden behind the sofa. A Bronze Star, a Silver Star, an Oak Leaf Cluster in lieu of a second Silver Star, a Distinguished Service Cross and the ultimate Medal of Honor.

A Technical Sgt. in the U.S. Army during WWII, Bernie Bell later worked for the Veterans' Administration in Buffalo, NY after his discharge. He earned the nation's highest military honor after capturing a schoolhouse occupied by German troops near Mittelwihr, France on Dec. 19, 1944.

Then-President Truman personally awarded the Medal of Honor. Bernie Bell gave my mother this signed original photo and his original papers citing his Meritorious service. We recognize and thank Bernie Bell, a decorated hero in our nation's eyes, for his service and honor his memory as one of The Unfamous Ones. 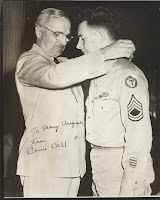 The War Letters - On Hiatus

March 8, 2018 Today is my birth father Frank's birthday. I think he's been whispering to me. I've been working on this project...